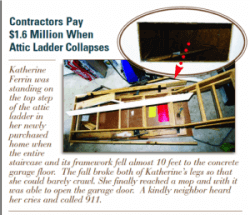 Jane Doe was standing on the top step of the attic ladder in her newly purchased home when the entire staircase and its framework fell almost 10 feet to the concrete garage floor. The fall broke both of Jane's legs so she could barely crawl. She finally reached a mop and with it was able to open the garage door. A kindly neighbor heard her cries and called 911.

Pajcic & Pajcic's inspection revealed shoddy construction practices in Jane's expensive home. The ladder had a few nails, but no nail or bolt through any of the manufacturer's pre-drilled holes in the ladder and its frame.

The subcontractor's dismissive attitude at his deposition made the case for his $1 million of insurance a slam dunk. The homebuilder and its insurance company then argued over whether the subcontractor's one million satisfied the retention requirements. Ultimately, the homebuilder and its insurance company each paid half of the next $600,000 to settle the case at mediation.

A word to the wise: Jane had been careful enough to have the house inspected before she purchased it, but not only did the inspection company overlook the attic ladder, it also had no insurance of its own.