City of Atlantic Beach Does the Right Thing, Resulting in $1 Million for Teenage Burn Victim 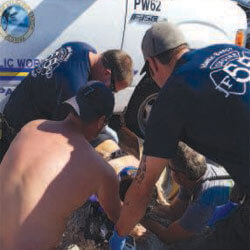 Anyone who goes to the beach to sunbathe should feel safe and secure in the sand. But for 13-year-old Jane Doe, a day of relaxation turned into a tragedy that would change her life forever.

Jane and her friend were getting some sun while lying on big colorful towels on the beach when suddenly a City of Atlantic Beach employee inexplicably drove his truck right over the girls.  The truck stopped in the sand on top of Jane as the hot underside of the truck seared her skin.  Jane was taken by air ambulance to Shands burn unit in Gainesville where she was treated for second and third degree burns over 30 percent of her body. Over the years, she has endured multiple painful surgeries and procedures and will likely need more in the future.

Because a government entity was responsible, there are caps in place that would limit the amount we could recover for Jane to just $200,000. Typically, in order to secure something closer to what Jane would deserve, we would go through the claims bill process where we seek approval for a greater amount from the Florida Legislature. This is a long and tedious process, but the firm has triumphed in all of our prior claims bill cases.

This time, Pajcic & Pajcic found a way to prevail without a claims bill. The law provides an exception where there is insurance and Atlantic Beach had secured a $1 million policy. At first, the insurance company refused to pay, but Pajcic & Pajcic cited an appellate decision that would have forced the insurance company to pay several times the policy limits if it refused to tender the limits.

Fortunately, after significant litigation, both the city and its insurance company ultimately did the right thing, paying $900,000, several times the sovereign cap.  Another $100,000 was available for Jane from a family uninsured motorist policy, bringing the total recovery to $1,000,000.

Jane can now have some closure and focus on finishing high school and looking to her future. We also are glad to see the city has changed its policies when it comes to workers driving on the beach, so we are hopeful nothing like this will ever happen to anyone else.