Exit Information Guides, Inc. hired John Doe's company to paint the metal roof on a large storage shed it owned. While helping his employee get started on Memorial Day, 1995, John plunged to his death when he stepped on a fiberglass reinforced roofing panel, which was corrugated in exactly the same pattern as the metal roofing panels.

Unfortunately, Pajcic & Pajcic could not sue the manufacturer of the roofing panel because of the statute of repose. Another legal technicality gave immunity to Scotty's who had originally owned the building and had the roof installed. And the trial judge granted summary judgment in favor of Exit Information Guides, too. 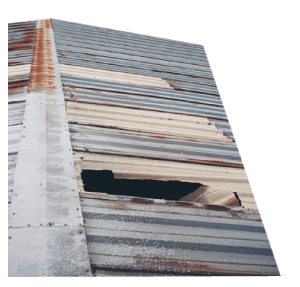 Pajcic & Pajcic got the summary judgment reversed on appeal based on evidence which showed Exit Information Guides had no program to inspect or maintain its buildings and had not warned Mr. Doe about the fiberglass panels.

At trial there was no real dispute that the panel was old and deteriorated. The defense claimed instead that the age and condition of the panel was irrelevant because Mr. Doe should have known that even a brand new panel would not hold a squirrel, much less a human.

The most dramatic moment in the trial was when Inga Simmons, Steve Pajcic's trial assistant, stepped onto a new fiberglass panel in front of the jury to demonstrate that a new or properly maintained panel would indeed hold a human. (Inga had proven her dedication moments earlier when she had stepped on a scale in front of the jury to show that her weight was the same as Mr. Doe's. It should be pointed out that he was short and slight of frame.)

The jury returned a verdict of $712,198.43 for Mr. Doe's widow Jane and assigned 57% of the fault to Mr. Doe and 43% to Exit Information Guides. The judgment was less than what Pajcic & Pajcic had hoped for, but was still four times greater than the defense's last offer.