7 Figures from 7 Defendants for 6th Wreck in 6 Nights 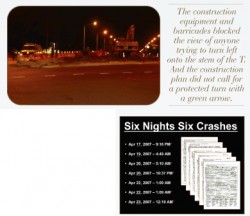 During the day the road work at the busy T intersection did not present any hazard, but at night, when the work crews went home, it became deadly. The construction equipment and barricades blocked the view of anyone trying to turn left onto the stem of the T. And the construction plan did not call for a protected turn with a green arrow.

Each of the first five nights resulted in an accident involving a vehicle making that obscured, unprotected turn. The conscientious police officer who investigated the first night's accident testified that he went to the construction site the next day to warn the contractors, but nothing was changed. The accidents continued each night, but with no serious injuries until the sixth night when Jane Doe was killed as her nephew cautiously tried to negotiate the turn.

Ms. Doe was the matriarch and business guru for her extended family who had immigrated from Vietnam and started nail and dry cleaning businesses. After Ms. Doe's death the businesses suffered, but those family members had no legal claim. Under Florida law Ms. Doe's only legal survivor was her husband of three decades. Mr. Doe speaks little English and moved back to Vietnam shortly after his wife's death.

Despite the absence of economic damages and only a single survivor, Pajcic & Pajcic was able to make a fair recovery for Mr. Doe. Very little of the recovery came from the two drivers because of their minimal insurance. Over $1 million came from the companies involved in the road contract: The project manager, the general contractor, the design engineering firm and the barricades companies, all of which Pajcic & Pajcic argued could have prevented this tragedy.

The settlement provides Mr. Doe with a comfortable retirement in his native country, but he also plans to use it to make sure the grandchildren receive all the educational opportunities America has to offer.