$5 Million for Fall through Chicago Skylight 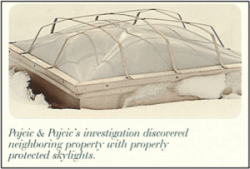 The Does and the Roes grew up next door to each other in Callahan. John Doe married Jane Roe, and Jane's brother Bobby married John's sister Gail. Bobby and John both went into the construction business. Bobby was a founding partner in one of Jacksonville's most prestigious construction companies, The Stellar Group. He brought John in shortly after, and John became a valuable project superintendent.

On February 25, 1994, John went to Chicago to repair a refrigeration unit on the roof of L. Karp & Sons headquarters. The roof was covered with two feet of snow. As John and the Karp maintenance manager walked across the roof, John stepped on a hidden skylight and plunged 36 feet to the concrete floor below.

John suffered severe facial and skull fractures, a closed head injury, fractures of his left hip and shoulder, and other multiple fractures and internal injuries. After numerous surgeries and extensive rehabilitation John was left partially blind and disfigured. He cannot talk or walk normally. He has past medicals over $350,000 and he faces a hip replacement in the near future.

Pajcic & Pajcic constructed an exemplar guard for the skylight which would have prevented the fall and a large scale model which dramatically illustrated the magnitude of the fall. A skeleton was marked to show the many injuries all over John's body, and x-rays, MRIs and CT scans were enlarged and colorized.

A key break in the case occurred when Pajcic & Pajcic discovered that a similar accident had occurred at Karp nine years earlier. Pajcic & Pajcic amended its complaint to add punitive damages against Karp.

Pajcic & Pajcic settled John's tort case for cash and annuities with a present value of $4.9 million in January 1995. His worker's compensation settlement in October 1997 brought his total to over $5 million.

John has not been able to return to work with Bobby, but inspired by Casey Martin, he is trying to play golf again. He is also continuing to pursue his lifetime interest in classic cars and hopes and dreams of opening his own business in the future.