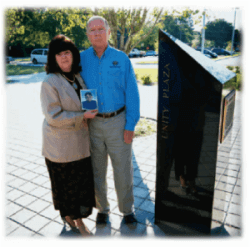 It was a tragedy that touched the hearts of all Jacksonville citizens. 14-year-old Jeff Mitchell was gunned down while sitting on a chair at Terry Parker High School waiting for his father to pick him up following an after school event. The criminals were caught and sentenced to death or life imprisonment for their acts, but Jeff's parents were not satisfied. They wanted to do all they could to protect other students from the same fate. They hired Pajcic & Pajcic to bring suit against the school system for its inadequate attention to the safety of children.

Discovery revealed that for several years before Jeff's death, Terry Parker was one of the more dangerous high schools despite its presence in a safe neighborhood. Two years before the shooting, the principal had taken down a security fence that his predecessor had erected around the school. At the same time, he had installed an even higher fence around one parking lot to protect the school's drivers' education cars.

The school had not hired any security for the after school event even though it had provided security for similar events. All sponsors of the event had left the school grounds even though Jeff and his friend were still waiting for their ride.

According to Jeff's friend, the evening education principal had refused to allow him and Jeff to access school's telephone, instead telling them to use the pay phone outside. The school premises were dimly lit and bulbs were missing from the exterior lights in several areas of the school.

On the eve of trial, with a new school superintendent, the school board finally agreed to settle the case for a total of $425,000. Pajcic & Pajcic was able to recover more than the $100,000 per person limit on sovereign claims because it had filed a federal civil rights action against the principal and school board, which was still pending before the 11th Circuit Court of Appeals at the time of the settlement.

Jeff's parents, Glen and Margaret Mitchell, are devoting much of the settlement and their time to the work of the Jeff Mitchell Foundation, which works to keep underprivileged kids out of the criminal world. The school board has implemented most of the security measures advocated by the plaintiffs in all high schools in Jacksonville. Pajcic & Pajcic and the referring attorney Bill Birchfield gave a discount in their fee to help fund the Jeff Mitchell Foundation.