Daniel was a typical 11-year-old who loved karate, biking, boogie boarding and golfing. He was getting a ride to school with a classmate one morning when a crash took away his ability to do all of those hobbies. A distracted driver 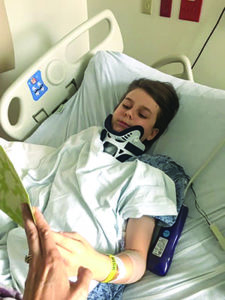 was speeding through traffic, lost control and crossed the centerline on International Golf Parkway, slamming head-on into the car where Daniel was a backseat passenger.

Daniel was hospitalized with a long list of injuries, including a neck fracture, traumatic brain injury, broken collarbone, torn ligaments, damaged lung and the loss of feeling in some extremities.

Daniel’s parents offered to settle for the defendant driver’s insurance policy limits, but the insurance company refused to tender its limits to the injured child, forcing a lawsuit by Pajcic & Pajcic. As the case neared trial, the insurance company had to fork over the full value of the claim. The $2.3 million ultimately paid was more 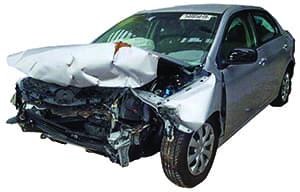 than 20 times the original offer that the insurance company had refused.

Daniel still struggles with migraines and pain, but he is making progress every day.

He and his family are grateful they trusted Pajcic & Pajcic with their case. As Daniel’s father put it, “Everyone at the firm goes out of their way to take care of you. We can’t thank them enough for all they did to help our son.”