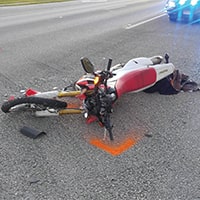 It was 6am, the sun had not yet risen along US 1, and Kevin was on his way to work riding his Honda CRF250L and wearing a helmet. Yes, it was a dirt bike; yes, it was street legal.

He lived a full life, working 50-hour weeks as a surveyor for one of the largest construction companies in the country and fishing the St. Augustine backcountry for reds, trout, and flounder.

As happens all too often to bikers, the other motorist claimed that he saw a pair of headlights in the distance but never saw or heard Kevin approaching. Kevin

collided with the rear passenger door of a Chevy Suburban. First responders air-lifted him to the Orange Park Trauma Center with an open left femur fracture.

Initially, the prospects for a monetary recovery looked bleak. The crash report listed Hertz as the owner of the vehicle, which brought with it the limitations of the Graves Amendment, meaning the rental company can’t be held liable. But after some digging, Pajcic & Pajcic discovered the defendant driver was actually on the job. Still, the company’s insurance representative affirmatively stated, “there is no excess/umbrella coverage.”

Reading through the 800+ page insurance disclosure, Pajcic attorneys did not buy that story. And, after a carefully worded demand, the insurance company finally came clean, admitted that there was in fact excess/umbrella coverage, and asked for an early mediation.

Mediation day was one Kevin will never forget. Sitting in the Pajcic conference room with the mediator and defense counsel, almost a year to the day from the crash, Kevin, again, had to rush to 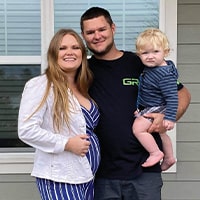 the hospital. But this time, it was for good news. Fifteen hours later, he became a first-time father! It was the perfect ending to a year where he also bought his first house, got promoted at work, and settled for $2 million, double the amount of the underlying commercial automobile insurance limits.