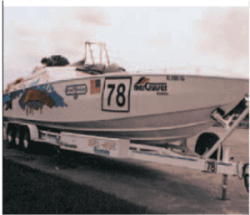 Three Chicago executives were racing their champion power boat off the coast of Boca Raton when the engine began to sputter. They dropped out of the race and slowly headed back to shore. Just as they came into the harbor the engine room exploded sending all of them overboard. The driver broke his ankle and his leg; the navigator broke two bones in his leg; and the throttle man fractured his heel.

Pajcic & Pajcic and the Chicago firm of Bell, Boyd and Lloyd brought the suit against Mercury Marine which had recently reconstructed the engine and engine room.

After over 40 depositions and two mediations and with the help of a computer animation of the accident sequence, the plaintiffs settled their claims one week before trial for a total sum of $2.2 million.