$1.5 Million Settlement For Scooter Driver and His Canine Passenger

John Doe was just driving his moped down A1A in Flagler County with his golden retriever "Doc" on board, when suddenly a driver hit him from behind. The scooter caught on fire and John suffered 3rd degree burns on the lower half of his body and broken facial bones. Miraculously, Doc was not seriously injured, though his eyelashes and whiskers were singed.

John contacted Pajcic & Pajcic  whose investigators took immediate action to preserve crucial evidence, canvassing the area and finding witnesses, including some who had taken valuable pictures of the scene. Pajcic & Pajcic was able to secure a $1.5 million settlement from the defendant driver's insurance company. J.J. 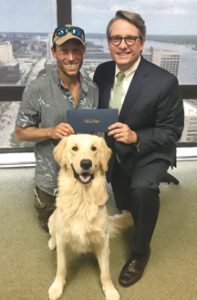 appreciated how this was all done in a very timely matter. "It allowed me to move on with my life." John's days of riding a moped are over. He bought a van and he and Doc traveled across the country together, including a trip to Yellowstone National Park and Vancouver. Doc proved to be the ultimate companion and comfort dog and as far as John is concerned he truly is man's best friend. And John knows he can now count on members of the Pajcic firm to also be his friend for life.