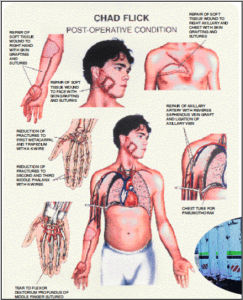 John Doe was a 19-year-old surveyor with movie-star good looks and an athlete's physique. As surveyors can be required to do, he was standing in the middle of the road shooting an angle with co-employees. John saw the Waste Control recycling truck coming and made eye contact with the driver. After the truck passed, he went back to focusing on his instrument. After going about half a block further down the road, the truck driver realized he had missed a house and started backing toward it. Before John realized what was happening the truck backed over him and dragged him 60 feet. The accident mangled John's right arm and hand, burned and crushed his chest and scraped the skin off the right side of his face. 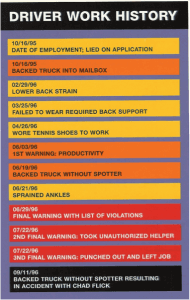 John has had 16 surgeries with medical bills of almost $100,000. Pajcic & Pajcic discovered company documents which showed that, although the truck driver had been with the company less than one year, he was already known as a "problem employee" with numerous safety violations and disciplinary warnings, including two prior incidents of improper backing. In fact, at the time he was hired the driver did not meet Waste Control's standards. It was a baffling mystery as to why this driver was ever hired and then never fired.

The mystery was solved when Pajcic & Pajcic's investigation revealed that he was the son-in-law of an influential politician. The case settled just as Pajcic & Pajcic was preparing to amend its complaint to seek punitive damages and to ensure the admissibility of all this compelling evidence by adding a count against an individual supervisor for negligent hiring and retention. The structured settlement provided lifetime benefits to John with an expected payout of over $3 million and a present value of $1.5 million. John is preparing to go back to college and remains close to his high school sweetheart, who has stood by him steadfastly despite all his scarring and disabilities.