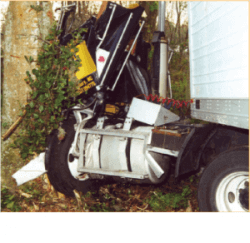 It was hard to believe that John Doe would ram into the rear of another vehicle at 55 mph since John was a professional driver without a single accident in over 39 years.

Yet, the accident report said John's tractor-trailer had struck TK's boat trailer from the rear as TK slowed to make a right hand turn. Unfortunately, John had suffered serious injuries and could not remember anything about the crash.

The damage to the boat and trailer, the skid marks, and witnesses not listed on the accident report seemed to prove that TK had actually been in the on-coming lane and turned left in front of John.

To prove he was going the same direction as John, TK came up with a receipt from his neighborhood convenience store a mile back up the road in the direction from which John was coming. The receipt was anonymous, but did have a date and time stamp of just a few minutes before the estimated time of the crash on the accident report.

Pajcic & Pajcic rebutted this receipt with information obtained from the black box in John's truck, which showed the exact time of the crash was actually a few minutes before the time on the receipt.

Even though TK filed a counterclaim blaming John, TK's insurance company and the underinsured motorist carrier both eventually tendered their policy limits to John. Pajcic & Pajcic also demanded the policy limits from the carrier insuring the boat, which denied coverage on the grounds that the boat was not being "used" as a boat as required by the policy.

Despite the absence of a Florida case directly on point, Pajcic & Pajcic had persuasive arguments for coverage, including the Florida presumption in favor of coverage, the motor vehicle cases interpreting "use" as broader than "operation", and the contrast between "use as a boat" in the medical payments section of the policy and simple "use" in the personal liability section.

The boat's insurance company tendered its limits after a summary judgment in favor of coverage. Even though John is unable to return to work, the settlements will help him and Jane, his wife of over 50 years, enjoy their golden years together.