Home » Case Results » $1.25 Million from Drunk Driver and His Company

$1.25 Million from Drunk Driver and His Company 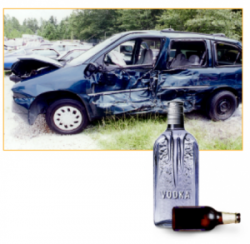 Jane Doe and her ten-year-old son Jim were on their way home in her mini-van. Jane was a supervisor in The Department of Corrections and her husband John had worked his way up to Vice President of a plumbing company. They are both devout Baptists who never drink any kind of alcohol.

Poss was Ludden's foreman at Tim Prep Inc., a grading contractor. After work and when work was rained out, Poss's crew drank a lot of alcohol.

On this Tuesday it started raining in the morning and Poss and Ludden started drinking at noon. In the four hours before the crash, Ludden had 12 beers and a third of a gallon of vodka. Poss had two Darvocets, numerous beers and his share of the vodka.

Poss and Ludden were speeding down Old Plank Road trying to pass Jane as she turned left toward her home. Their pick-up slammed into Jane's mini-van right at the driver's door. The van skidded through a ditch and into an oak tree.

Jane suffered a severe crush injury to her left foot. She and Jim also had soft tissue injuries. Jane had three surgeries with hardware implanted and missed six months of work.

Pajcic & Pajcic's prompt, intensive investigation revealed all the sordid details of the Poss-Ludden debauchery. Equally important, Pajcic & Pajcic found proof that Tim Prep knew or should have known of their habits.

Faced with a strong claim for punitive damages, which would drive the compensatory damages; defendant's insurance company paid $1,250,000 at mediation. Justice has prevailed on the West Side.