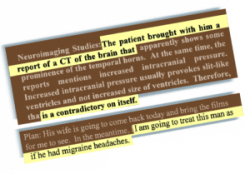 John and Jane Doe were a young couple in small town, South Georgia, living the good, old-fashioned Southern life. John coached their children in sports and worked with his mother at a Target distribution center. He and Jane had their own trailer on land adjoining her parents in the countryside outside Adel, Georgia.

Then John started having headaches. They got so bad he went to see his family physician who immediately referred him for a CT scan of the brain to rule out anything life threatening. The radiologist who looked at the CT scan reported significant abnormalities consistent with hydrocephalus.

John's physician immediately referred him to a neurologist. But the neurologist, without even looking at the CT films, decided the radiology report was "contradictory on itself." He told John all he had was migraine headaches and prescribed some pills.

In a few months the headaches got so bad John had to go to the ER. John started having blackouts. Each time the neurologist diagnosed headaches and told John not to come back for three months.

Right before Christmas John collapsed on the job. He was rushed to the ER at a hospital which had no neurosurgeon on staff and would not call one of its neurologists at night. 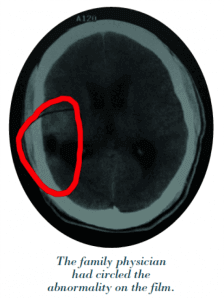 The ER physician knew it was more serious than migraines. He ordered another CT scan and also a lumbar puncture, which is tragically dangerous for a patient with hydrocephalus. As a result John suffered a brain stem herniation and died Christmas Day, 2003.

Jane and the family were referred to Pajcic & Pajcic by a great aunt who had seen the work of Pajcic & Pajcic as a witness in a nursing home case. Experts retained by Pajcic & Pajcic not only criticized the neurologist and the hospital doctors, but also testified that John could have lived a normal life with timely treatment of his chronic hydrocephalus.

The case against the neurologist, who is now a professor at the University of South Alabama, was especially compelling.

He was not only so arrogant as to override the radiologist without even looking at the CT scan, but he also denied the films showed any significant abnormality when he finally looked at them during deposition.

Mediation adjourned with defendants offering $1,050,000 and plaintiff insisting on $1,200,000. Defendants finally agreed to plaintiff's demand one day before it was to expire. As a result of the settlement, the children have college funds, the family has a new home and there is sufficient monthly income to allow Jane to stay home and raise the children.